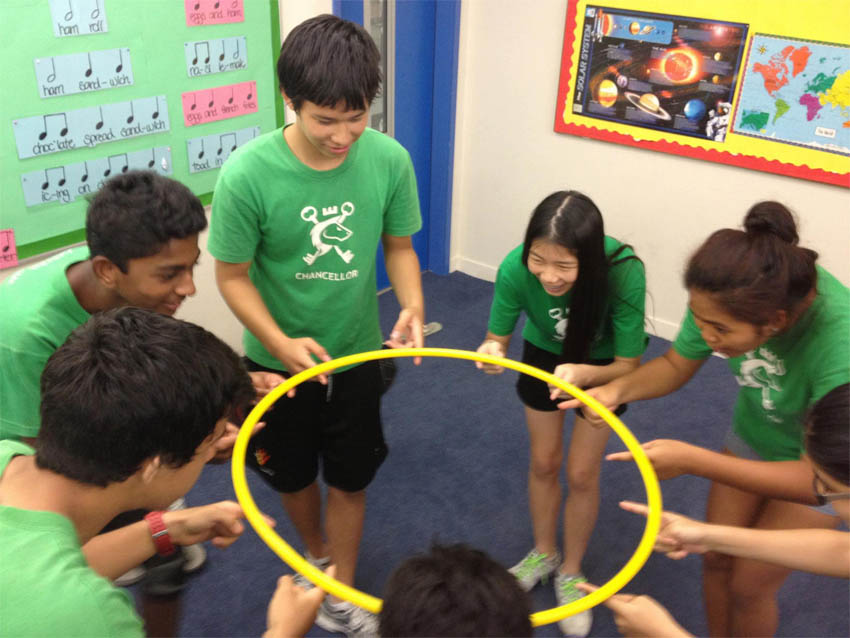 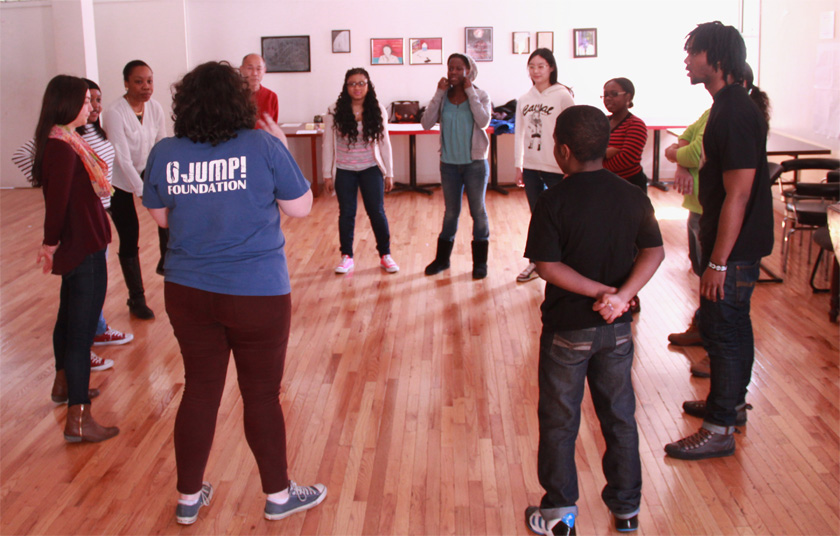 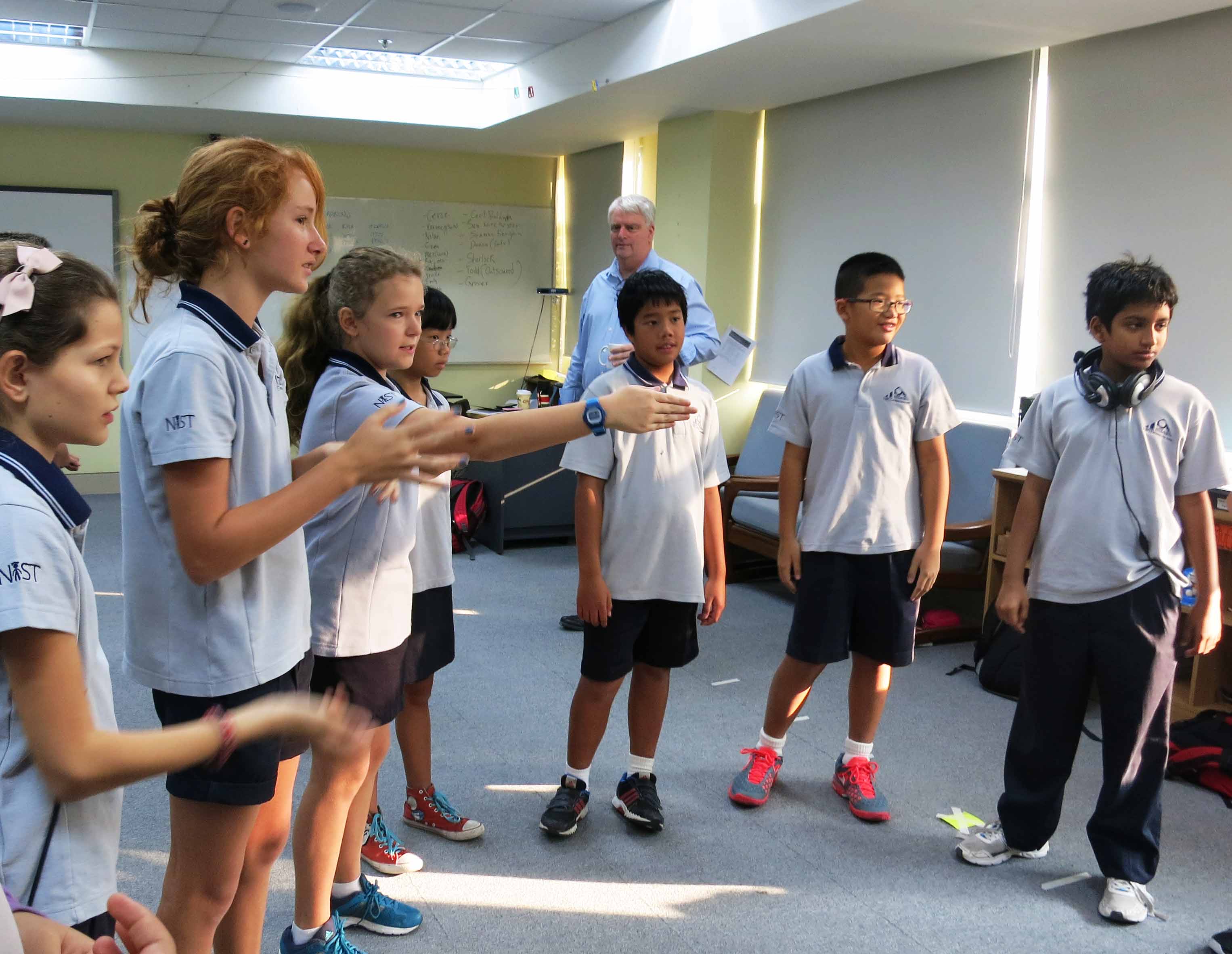 Being with others, I have always pursued that sense of total immersion, a feeling that transcends mere obligation, to cultivate a more profound and organic relationship between people. As a member of JUMP!’s Junior Facilitator Program, I have not only experienced the growth of a committed, supportive group of students from Shanghai and Hangzhou, but have also learned and demonstrated strategies for inspiring confidence within all members of a team. Over the past two months, I have gained tremendous insight into the possibilities that can arise among individuals, while bolstering my capacities as a leader, an observer, and a facilitator.

My experience with JUMP! was unique in that it was not confined to members of any one school, but rather entailed the congregation of representatives from SCIS (our host), Concordia, Hangzhou International School, and SAS Pudong. Though hailing from different institutions, every student was incredibly welcoming from the very beginning, and this goodwill only continued to expand as we progressed through two training sessions in February. During this time, we collectively distinguished the concrete, top-down nature of management from the more fluid, discovery-based qualities of facilitation, refined our public-speaking skills to a startling degree, and otherwise engaged in a series of activities and discussions that continually pushed us beyond the everyday and familiar, to embrace those opportunities outside the realm of dull comfort.

Above all, the challenges that I experienced during training allowed me to acknowledge the driving force behind all empowered teams: trust. As the current President of the Student Council at SAS Pudong, I have occasionally encountered bouts of doubt, and have looked for a means of resolving these silent tensions, this uncertainty beyond immediate control. Following one training activity wherein each student was silently lifted into the air and then placed safely onto the ground by his peers, however, I was able to consider again the importance of trust between people, and the steadfast purpose that conquers all doubt. As I collaborated with the other students- individuals who I had met just hours before- I realized the great willingness in all people, and reaffirmed a fundamental sense of hope that has since colored my relationships substantially. This sentiment of trust was further consolidated through an activity that occurred on the second day of training, during which everyone partnered up and took turns answering the question, “Who are you?” This single prompt incited a wealth of introspection, and the exchanges that followed signified the full extent to which the team had bonded together.

It was one of the program’s most exhilarating experiences.

Having become certified Junior Facilitators, we met again in March to exhibit our earlier work and facilitation strategies during the annual ACAMIS conference. Demonstrating the values of experiential and student-led learning, each Junior Facilitator helped emphasize JUMP!’s commitment towards “turning education on its head,” as we helped facilitate a gymnasium full of educators and administrators through a number of activities. In spite of initial anxieties, we quickly overcame any hesitations, to ensure a sincere and productive experience. Though I was struck by the enthusiasm and teamwork with which the educators approached and overcame each challenge (the sight of sixteen administrators maneuvering on one tarp was especially refreshing), I was still more absorbed by the thoughts that emerged during the debriefing period following each activity; questioning and conversing with my group of educators, I was delighted by the sharing and scaffolding that occurred within the team, and realized the same themes of trust, shared direction, and clear communication that help define the professional world.

Experiencing so much in the past two months, I presently embrace facilitation as the most effective means of inspiring a strong, purposeful team. Facilitation appeals to me in that it manifests itself differently from person to person, such that one great facilitator may adopt an exuberant, lively approach, and another may choose a more succinct, self-effacing means of motivating growth in other people. I want to thank Justin, Alex, Bo, and everyone else at JUMP! for setting me on the path towards developing my own style of facilitation, and likewise want to acknowledge my fellow Junior Facilitators for the brilliant values that they each contributed to our group. I am applying these new strategies within the Student Council and beyond, and hope to help others realize the greatness within themselves.

Confession: I used to have major beef with New Year resolutions. Until this year, I refused to set New Year’s resolutions. My impression of resolutions the way most people do them is a half-hearted, vague, goal that people set because it’s “the thing to do” but don’t really intend to follow through. How do you know? No one talks about them past February. The reality of it is, most new years resolutions don’t get fulfilled because they’re just too general, unrealistic, or half-hearted. This Year, Let’s Try Something New Inspired by The Power of Habit, as well as some amazing productivity tools JUMP! Incorporates into our leadership curriculum, I’ve decided to set some real, concrete resolutions to complete in 2014. These resolutions help set goals with a vision statement, are intentional and well thought-out using the S.M.A.R.T. approach, and are reinforced with repetitive, habit-forming steps. With these three key components, Iyou can set goal-oriented resolutions that won’t be forgotten when February rolls around. What Does Success Look Like? I know this sounds strange, but creating a statement of success for yourself will help you picture what success will look like. That way, you know what to it feels like to meet that resolution. When I first started at JUMP!, I thought it was corny when I was told to visualize my time at JUMP! after finishing the experience, before actually starting the experience. The prompt looked like this: JUMP! was the most amazing personal and professional experience I have ever had in my life because _____________________. This prompt help me envision everything I wanted to accomplish at JUMP! on day one. How amazing is that? Looking back on them now, these goals haven’t been changed, but many more have been added to the list. For every day use, I use something a little simpler: Success will be when _________________________.’ #bob Take this statement, and list out every single criteria you need to reach in order for your resolution to be successful. Be S.M.A.R.T About Your Goals At JUMP!, we believe in doing things with intention. As Steffen mentioned in his post about PVC, your mindset going into an experience helps shape what you’ll get out of it.  Translation: if you set your goals purposefully and with intention, you’ll be able to identify the key steps you need to take in order for the goal to be successful. After identifying what success looks like, measure your progress by forming tangible checkpoints along the way. In other words, make your resolutions S.M.A.R.T: Specific – What is my goal? What do I want to achieve? Who is involved? How will I achieve these goals? Measurable – How will I measure it? What’s my indicator for success? Action-oriented – What are the specific steps to achieving this goal? What are the check points to measure progress? Realistic – Am I willing and able to work toward this goal? How can I set myself up to avoid failure? Timely – What’s my time frame? How will I know when I have accomplished my goal?

Making a Habit Out of It

Commit to your resolution by making it second nature. Need to go to the gym more often? Set a schedule to go at the same time each day so that it becomes habitual. Trying to be healthier? Grab fruit instead of the chip bag. You’ll get to a point where you don’t think about the step as a step anymore, you just do it because it’s ingrained in your daily routine. Habits define how we approach everything in our lives, so the more often you change your mindset with PVC or make a S.M.A.R.T. goal, the more naturally it will come to you.

Mix It All Together

Using these tools together has helped me visualize realistic resolutions for the new year, and each tool plays a significant role in making a daunting task doable. A vision statement sets your expectations and highlights what you want to get out of the goal while the S.M.A.R.T method allows you to think about your goals concretely by setting checkpoints along the way. Finally, internalizing these goals will make your small tasks habitual, and allow them to easily weave into your day-to-day life.

This year, JUMP! into your 2014 resolutions with a bang, and make them a reality.